08.10.2012
"The cost of the project is nearly 7,000 million Euros, the largest international contract achieved by Spanish companies."

The awarded contract will include the design and construction of the track and systems, the supply of 35 trains and operation and maintenance over 12 years.

The SRO (Saudi Rail Organisation) has chosen the Spanish bid to equip, manage and maintain over 12 years, the train line that will cover the 444 kilometres that separate the holy cities of Mecca and Medina in less than three hours. 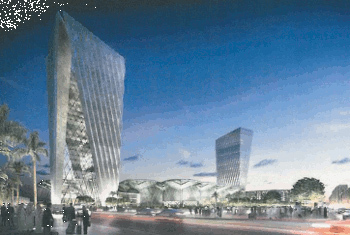 Awarding a project that is this important, with a budget of 6,736 million Euros, is an example of the qualification level attained by Spanish high speed rail links. This is the largest international contract achieved by companies in our country. Its execution will no doubt serve as a shop window to obtain new high speed rail contracts in the future for different parts of the world.

The Spanish companies have vast experience acquired over the last twenty years, since the middle of the eighties when the building of these types of lines started. Currently they add up to nearly three thousand kilometres, which link the four cardinal points in the Spanish territory and make Spain the first country in Europe and the second in the world with the most number of high speed rail tracks in operation, only overtaken by China.

The Pilgrims’ AVE, a project in two stages

The building of this project, known as the Pilgrims’ AVE, is of such magnitude that at the time, the Saudi government made the decision to divide it into several stages, setting up the corresponding tenders.

Stage 1 was made up from the design and construction of the infrastructure and the construction of five stations. These stations are the header ones of Mecca and Medina, Jeddah, King Abdullah Economic City (KAEC) and King Abdulaziz international airport. Although they will share a common structure, each will have decorative elements that are differentiated by colours.

Stage 2, which has been awarded to the Spanish consortium, includes the design and construction of the track, design and installation of the electro-mechanical elements (power supply, catenary, telecommunications, ticketing), supply of rolling stock, start up of the project and operation and maintenance of the line and rolling stock during a period of twelve years.

The tender’s demanding conditions as requested by the Saudis meant that only two consortiums were pre-qualified to be able to present their bids in this second stage: a French-Saudi group and the Spanish-Saudi group Al Shoula, who was declared the winner in October 2011, after a long wait as the bid had already been agreed on the 3rd July 2010.

Ineco was in charge of preparing the technical proposals and Consultrans the economic-financial model, legal-trade aspects and coordination, together with the legal services of Herbert Smith, for the contracts and the final bid.

Last 14th January, representatives from all the companies travelled to Riyadh to sign the contract. The ministers for the Treasury, Dr. Ibrahim Al-Assaf and for Transport, Dr. Jabara Bin Eid Alsuraiseri were in charge of ratifying it on behalf of the Saudis. The Spanish ministers for Foreign Affairs and Cooperation, Mr José Manuel García-Margallo and for Public Works, Ms Ana Pastor also attended the event.

The awarding shows that Spain has great skills in everything related to engineering and public works in rail and land transport and that this country has the latest technologies to be able to face the challenges which this project will have, not only due to weather conditions in a desert environment (more than half of Saudi Arabia is covered by desert sand), but by the bid’s profile, with an exponential increase in the number of travellers during pilgrim periods.

444 kilometres in a desert environment

The route runs in a north-south direction parallel to the coast for several kilometres, which is affected by the incoming winds from the Red Sea on the west, which have two main consequences: the presence of sand in suspension and the formation of shifting sand dunes. The structures and the trains will have to be subjected to dust and sand storms and great variations in temperature.

“Due to the journey that the train will make, the structures and the trains will be subjected to dust and sand storms and great variations in temperature.”

The volume of passengers could reach and even surpass in peak times, more than 160,000 travellers per day, positioning it as one of the lines with the largest amount of traffic in the world.

This makes it necessary to use materials and equipment that are especially sturdy, ad hoc technical solutions for the project and much more frequent and thorough maintenance than is normally needed. One of the requirements set out in the tender was that the components, equipment and systems tendered for should have been previously tested and be in commercial use, and should have the possibility to be adapted to the project’s special characteristics.

The Spanish bid met these demands perfectly and the 35 trains that will be supplied by Talgo (with an option of being able to acquire 20 more) will have the same technology as the Spanish AVE. There will be carriages for two classes, tourist and business, and the exterior and interior decoration will be exclusively designed for this route. The line will be assembled on an electrified double-width UIC track (1.435mm), on ballast, with sections of slab track for which the installation of a RHEDA 2000 system is proposed.

A protection system will be installed to avoid sand pollution on the tracks. Once the assembly has been completed there will be three permanent maintenance bases, two near the header stations and one at Km 125. Maintenance tasks will be mainly carried out at night.

This consortium is a great example of all that can be achieved abroad thanks to the collaboration among companies with unquestionable excellence and contrasting experience, coordinating public and private sectors, at a time when the internationalisation route is an essential resource for growth.

“Each of the stations will use a colour representing the significance of each city. Medina in green, Mecca in gold, Jeddah in mauve and the futuristic King Abdullah city in blue and silver”

“The volume of passengers could reach 160,000 passengers per day, making it one of the lines with the largest amount of traffic in the world.”