ArcelorMittal is a supplier of tram rails (Grooved, Vignole and Block Rail), according to EN 14811 within G or R tolerance group manufacturing categories. These group categories are involved in measuring rail verticality which becomes of importance for adjusting track width, embedding material interaction and to have best rail/wheel contact performance.​ 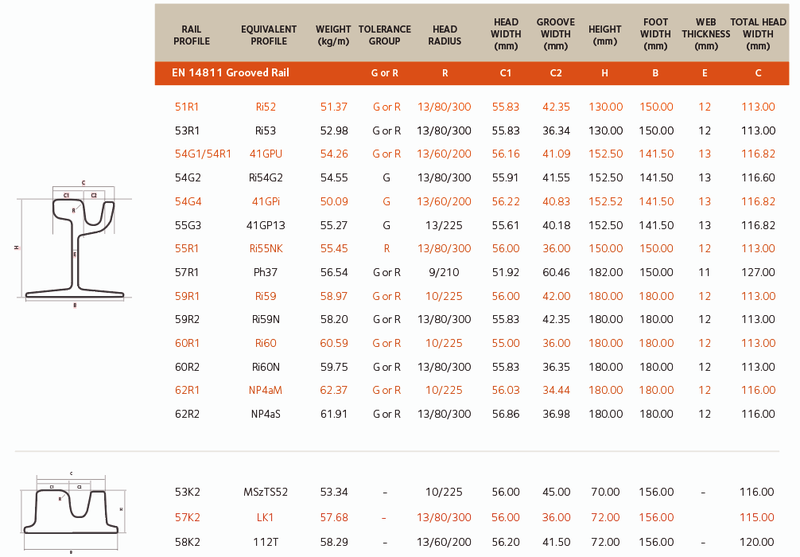 Use of Low Carbon and Low Carbon Vanadium (LCV) rails, with the addition of very small amounts of Vanadium provides an increased grain refinement throughout the entire rail and not just the outer surface.

This technique results in increased hardness and elongation compared to rails in grade R200, but with even lower carbon content. Also, thanks to the higher strain and grain refinement, after only six months of service, track hardness readings increases up to 30-45 HBW due to the strain hardening produced by wheel/rail interaction. In addition, since rolling stock wheels are associated with lower speed and low axle weight, the actual wheels do a smooth grinding on softer steel rails, helping to self-maintain embedded tracks, avoiding any Rail Contact Fatigue or head checks.

In fact, experience has shown Low Carbon (softer steel) rails are most suitable for City Transit embedded tracks. Thus, extending the life of the rail, and avoiding the high cost of replacing embedded grooved rail and street disruption.

As a result, ArcelorMittal proposes existing and especially NEW tramway and LRT systems to work with proven and widely available European technology in existing European City operators and test tracks.