The first High Speed line will serve to link the two largest cities in the country, with a line that is 511 kilometres long and will later have a branch to Campinas, a city that is located 100 kilometres from Sao Paulo.

On the map we can see the route that the first High Speed Line in Brazil will have. 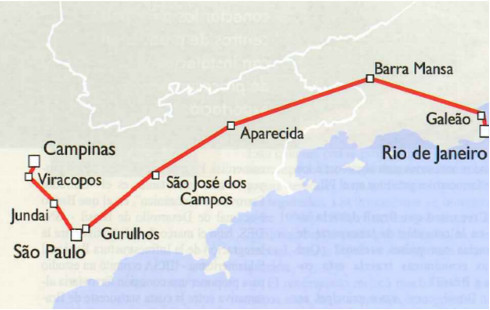 “Last January, BNDES approved a line of credit for 2,018 million Euros to start the construction of the High Speed train.”

The National Land Transport Agency (ANTT) of Brazil in August last year published the first draft of the tender documents for the first phase of the high speed train project (TAV), which will link Rio de Janeiro with Sao Paulo and Campinas. This phase consists of choosing the technology and the operator of the system, which will commercially exploit the service for passenger transport and the TAV stations, whilst the second phase will choose the construction consortium which will carry out the work.

ANTT required that the consortium or company interested in tendering for the concession should first deposit an offer guarantee for a minimum value of 30 million Euros. The rules of the tender documents set out that this guarantee could be in cash, with Government bonds or using a bank guarantee or bond. The guarantee must have a minimum 180 day term starting from when the bids from the companies are received, planned for the 30th April 2013, in the Stock Exchange of Sao Paulo (Bovespa), and will be returned to the company within 15 days after the contract is executed.

ANNT has developed a new formula to choose the winning consortium in this first phase, under new criteria; it will be a combination of two factors.

Firstly, the highest value bid for each kilometer of train operated will be taken into account. The minimum value set by ANTT is for 26.5 Euros per kilometer. At the same time, the company will have to present a “reference price” for the civil construction part of the project (the second phase), based on its technological requirements. The lower this price is the more competitive the offer. This price will be fundamentally be based on the estimated costs for the construction of the tunnels, bridges and viaducts, which represent the most expensive part of the project.

The winner of the tender will therefore be the consortium that offers more per kilometer operated and at the same time, the one that presents the cheapest construction project, based on the technological requirements.

The National Land Transport Agency (ANTT) published in the edition for the 13th December of the Official Diary of Uniao, a notice for tender for the first part of the concession for the construction, operation and maintenance of the High Speed Train (TAV) which will link Rio de Janeiro, Sao Paulo and Campinas.

This notice for tender informed that the tenders could be withdrawn until the 13th August 2013. Clarifications could be requested until the 16th April 2013; the clarifications must be analysed and replied to by the 17th June 2013. As well as this, ANTT has planned two meeting for clarifications at the stock exchange of Sao Paulo (BM&F Bovespa) on the 20th January and 19th March 2013.

The notice also sets out the dates for the bids to be delivered and when these will be opened. The envelopes with the bids must be delivered between 9 a.m. and 2 p.m. on the 13th August 2013. The opening of these bids will be carried out on the 19th September 2013 at 2p.m. in BM&F Bovespa.

Last 18th January, the main development bank of Brazil, BNDES, approved a line of credit for 2,018 million Euros to start the construction of the High Speed train. The financing line, which will run for 30 years, will serve to fund part of the total investment, calculated at 13,400M by the National Land Transport Agency (ANTT).

The 511 kilometre project will link the two largest cities in the country and will have a branch to Campinas, a city 100 kilometres from Sao Paulo. The interest rate will be one per cent above the rate for long term investments, which in the first quarter of this year had been fixed by the Central Bank at 5 per cent, according to an announcement.

The tender, which has suffered several delays, has been divided into two stages and the first of them, planned for next September, considers the implementation of the signaling, electrification, rolling stock and operation of the system.

Among the interested parties wanting to take part in the tender are consortiums from Spain, France, Germany, Japan and South Korea.

As was made public by David Oblanca and Alejandro Alvarez de Lara under the supervision of the Economic and Trade Office of the Spanish Embassy in Brasilia, the High Speed project is a Federal Government project for the construction of a high speed train to link the two main metropolitan areas of Brazil, Sao Paulo and Rio de Janeiro, as well as the city of Campinas (Sao Paulo). It will also link the airports of Galeao (Rio de Janeiro), Guarulhos (Sao Paulo) and Viracopos (Sao Paulo).

It is a 511 kilometre long high speed railway line with an estimated necessary investment of 15,000 million euros. The Government has divided the tender into two stages:
» The first will establish the technology and the operator of the TAV service.
» The second the construction consortium in charge of carrying out the works.
This way it is hoped that each company will devote itself to its most natural activity, without having to get involved in another sector which it has nothing to do with.

The aim of the tender is the concession by the Brazilian government through the National Land Transport Agency (ANTT), of the exploitation, conservation and maintenance during 40 years, of the railway line. The licensee should specifically undertake: The supply and assembly of the specific environmental measures, acoustic protection systems, control systems, telecommunications, electronics and other systems necessary, as well as the rolling stock and equipment for conservation and maintenance.
» Certification of the Systems and Rolling Stock
» Operation, maintenance and conservation of the line.
» Transfer of technology. There would be a contract between the granting administration and the company awarded the contract through which there would be a series of technological knowledge which the latter would have to transfer to the administration.
» Rail services with the quality requirements set out.
» Reinvestment in the infrastructure, rolling stock and necessary equipment.
» Exploitation of the functional areas of the stations.

The method the tender would be carried out is through a bid, with the company that offering the largest payment for the tender being the winner. The tender is open to national companies as well as those from abroad, separately or associated to a consortium. The consortiums are not limited to a number of members, they need not have a national member, and if there were to be one, this does not mean it would have to be the leading company.

With regards to the technical characteristics of greatest interest for the companies taking part we should highlight:
» The trains should be built to reach a speed of equal to or in excess of 300Km/h in the Express Railway Service between the stations of Barao de Maua (Rio de Janeiro) and Campo de Marte (Sao Paulo).
» In the rest of the rail services, the licensee could use trains that could reach speeds equal to or in excess of 250Km/h.
» The railway structure will be planned for a speed equal to or in excess of 350 Km/h. It will be up to the proposer to determine the maximum speed of the operation to optimize the system, respecting the maximum travel times required.
» The rolling stock should be from the most up to date technology used by the supplying company at the time the bid is put forward, which is operating at the time, and should be duly approved and certified.

“The government has divided the tender into two stages: the first one defines the technology and the operator of the service and the second the construction consortium in charge of the execution of the works.”

If you require any further information or you plan to visit us, please contact us